Everything You Need to Know About Cardinal Eggs 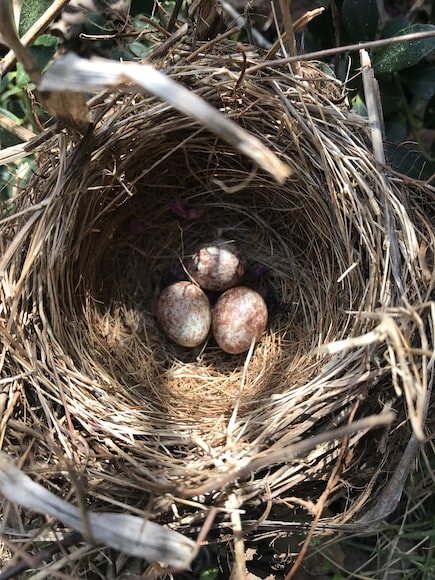 You might have spotted a bird attacking its reflection in a window, or perhaps seen a crimson-colored bird in your backyard. If so, you have already seen a cardinal.
Cardinals are lively backyard birds with crested heads, long tails, and cone-shaped beaks. They lay white glossy eggs with brown, green, or gray spots.
Abundant in the Southeastern states, the cardinals are intelligent and fierce birds, but they aren’t destructive. Over time, they have spread northwards, making them one of the most popular birds. You can easily distinguish male and female cardinals, as males have black masks around their beaks.

When Do Cardinals Lay Eggs?

Cardinals aren’t migratory birds, meaning they can nest by the beginning of Spring. They are quite flexible when choosing nesting areas.
Both males and females work together to build the nesting site in preparation for the breeding season, which starts from March through September. They can have up to four broods within one season.
Cardinals lay three or four eggs on a nest of twigs, roots, leaves, barks, and grasses. Their nests are low, which is why their eggs are prone to predation.
During breeding, males are territorial. Most northern cardinal couples stay together for breeding seasons, but during the winter, they nest and feed separately. 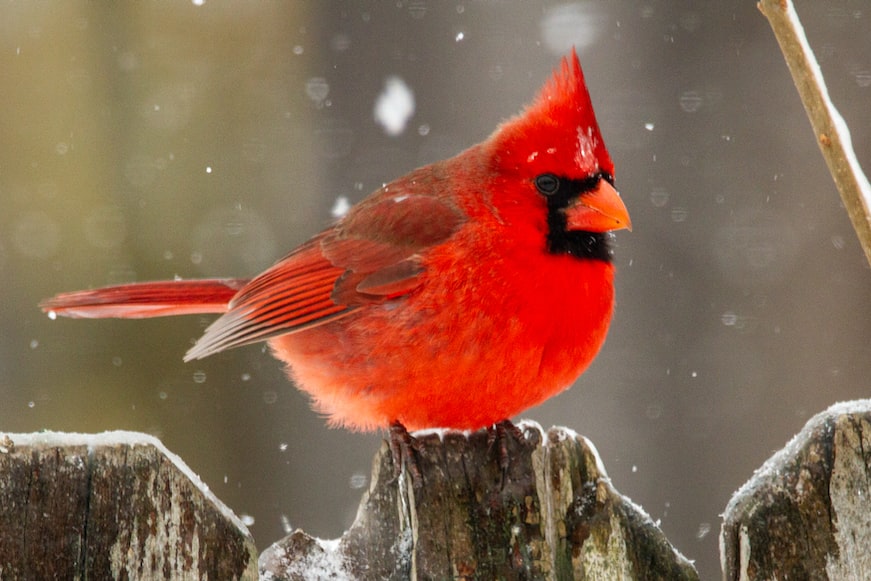 Like other species, cardinals have an exciting courting behavior. Every brooding season, in a spectacle of song and dance, males will raise high their crest feathers to impress the females.
Males have bold red coloration, which is thought to help entice and attract mates. The brighter the red plumage, the more attractive the male cardinal. Female cardinals find the most conspicuous males as more territorial, better couples, and ultimate protectors.
Females will choose males they deem worthy of taking care of the eggs and the hatchlings. As soon as the courtship ends, both birds will collaborate in making the nest. Females will do the house design and arrangement while the males will bring in materials such as leaves, twigs, branches, and grasses

Where Do Cardinals Lay their Eggs?

Cardinals cherish thick bushes and shrubs. You’ll mostly find them nesting in overgrown fields and shrubby hedgerows.
These birds love building their nests under the cover of grapevine, box elder, and nannyberry trees. Most of these trees not only provide cover but materials the cardinals need to make their nests.
Cardinals lay their eggs on their nests, which are usually 3-10 inches above the ground. The nest takes the shape of a cup and is built to last for their brooding season.

How Do Cardinals Guard their Eggs?

There’s a reason why teams like NFL’s Arizona Cardinals and MLB’s St. Louis Cardinals choose the cardinal as their symbol. Cardinals are fierce and protective around their nests.
They attack anyone or anything near their nests, even if it’s their reflection! The couples take care of hatchlings for about 9 to 11 days, after which the hatchlings leave the nest. Parents and hatchlings, like in most birds, live separate lives.

Can You Eat Cardinal Eggs?

Whether cardinal eggs are edible or not is questionable. However, cardinals are among the protected species of birds. This means eating their eggs is illegal.
Instead of trying to eat their eggs, build them a feeder and give them sunflower seeds. It’s their favorite food!
Everything about cardinals, from their plumage to courtship character is exciting for any bird watchers and enthusiasts.