A Baby Hummingbird’s Journey From Egg to Fledgling

For most people, the process of becoming a grown-up is a gradual one. There are many milestones along the way, and each person takes a unique path to maturity. But for baby hummingbirds, the journey from egg to fledgling is a race against time. They have to grow up fast, or they will die.

In this article, we will explore the amazing process by which baby hummingbirds become fledglings. We will look at how they develop physically and learn to fly and hunt for food. And we will see just how precarious this journey can be, as even a single mistake can mean death for a young hummingbird.

What time of year are baby hummingbirds born?

Most baby hummingbirds are born in the spring, between April and May. However, some birds may lay their eggs earlier or later in the year, depending on the climate they live in. For example, those living in southern regions may start nesting as early as February, while those in northern regions may not start until June.

The incubation period for hummingbird eggs is usually between two and three weeks. Once the chicks hatch, they are altricial, which means they are born blind and naked and require constant care from their parents. Both male and female hummingbirds will help to feed the young birds until they are old enough to fend for themselves.

Baby hummingbirds typically fledge (leave the nest) when they are about three weeks old.

How does a baby hummingbird look?

Baby hummingbirds are tiny creatures, usually no bigger than a penny. They have downy feathers that are usually brown or gray in color. Their eyes are large and dark, and their beaks are long and thin. Baby hummingbirds spend most of their time perched on a branch, waiting for their mother to bring them food.

When they are ready to eat, they open their mouths wide and stick out their long tongues. The mother hummingbird then inserts a bill of her own into the baby’s mouth and regurgitates the nectar. Baby hummingbirds consume about half their body weight in insects and nectar each day.

By the time they are six weeks old, they are fully feathered and ready to leave the nest. At this point, they are able to fly and feed themselves. However, they will continue to rely on their parents for protection until they reach adulthood.

How big are baby hummingbirds?

Can you imagine being born and already weighing the same as a paperclip? Even when they are fully grown, adult hummingbirds only weigh between 2-20 grams. To put this into perspective, the U.S. penny weighs 2.5 grams and a U.S. quarter weighs 5.7 grams. So, an adult hummingbird can weigh less than a penny or less than a quarter.

The smallest hummingbird is the bee hummingbird and can weigh as little as 1.8 grams which is less than a U.S. penny! The next time you see a penny on the ground, remember that there are creatures out in nature that weigh even less than that! Baby hummingbirds have a lot of growing to do to reach their adult size, but even when they are fully grown they are still very small creatures.

How long do baby hummingbirds stay in the nest?

Most baby hummingbirds leave the nest about three weeks after they hatch. However, they are not yet fully independent and will continue to beg for food from their parents for several weeks after leaving the nest.

While they are learning to fly and hunt on their own, they are still very vulnerable to predators and many young hummingbirds do not survive their first year. Once they reach adulthood, however, hummingbirds can live for up to 10 years in the wild.

How long do hummingbirds stay with their mother?

A baby hummingbird will stay with its mother for about 3-4 weeks after it hatches from its egg. During this time, the mother will feed her young chick small insects and nectar. She will also teach her offspring how to fly and build a nest. Once the chick is ready to fend for itself, the mother will leave it to start its own family.

Although they only spend a short time together, hummingbirds have a strong bond with their mothers. In some cases, chicks have even been known to return to their mother’s nest after they have left it.

This special bond is just one of the many things that make hummingbirds such fascinating creatures.

What do baby hummingbirds eat?

Baby hummingbirds eat small insects, such as aphids and mosquito larvae. They also eat nectar from flowers. In the wild, they find these foods by following their parents. However, in captivity, they must be fed by hand. Baby hummingbirds have very high metabolisms and must eat frequently.

They typically eat every 10-15 minutes. As they grow, they will eat less often but larger meals. Adult hummingbirds primarily eat nectar, although they will also eat small insects. They use their long beaks to reach into flowers to feed on the nectar.

They also feed on insects that they catch in midair. Hummingbirds are important pollinators and help to ensure that plants can reproduce.

What month do hummingbirds have babies?

Most hummingbird species mate in the spring or early summer and have their babies in the late summer or early fall. The baby hummingbirds are born naked and blind, and they are not able to fly for the first few weeks of their lives. Instead, they spend their days perching on branches and taking naps.

As they grow, they begin to explore their surroundings and learn how to fly and feed themselves. By the time they are ready to mate, they will have transformed into beautiful creatures with iridescent feathers.

So, if you’re wondering when hummingbirds have babies, the answer is typically August or September.

To sum up, a baby hummingbird is an adorable and fascinating creature to observe, as well as a rewarding experience for any bird-lover. They are such delicate little birds, yet their resilience and energy, combined with the rapid growth they experience in the early stages of life, make them remarkable.

Although it can be difficult to spot a hummingbird nest, it is worth the effort in the end. With the proper care and attention, these tiny birds can bring joy to any yard or garden.

It is true that taking care of a baby hummingbird requires patience and dedication, but the reward of seeing them mature into fully-fledged adults makes all the effort worthwhile.

What does a hummingbird look like as a baby?

Baby hummingbirds are incredibly tiny, measuring no more than three inches from beak to tail. Despite their small size, they are fully feathered and ready to fly just a few weeks after hatching.
The downy feathers that cover their bodies are typically green or brown, providing excellent camouflage as they cling to branches and leaves. As they mature, hummingbirds begin to develop the distinctive colors that make them so recognizable.
Males usually have bright plumage on their heads and throats, while females tend to be more drab in appearance. However, both sexes share one key feature: a long, slender beak that is perfectly adapted for sipping nectar from flowers. Thanks to this specialized diet, hummingbirds are some of the smallest birds in the world.
Yet despite their delicate size, these vibrant creatures play an important role in pollinating plants and keeping ecosystems healthy.

Why do I never see baby hummingbirds?

It turns out that there are a few reasons for this. First of all, hummingbirds hatch fully-fledged and able to fly. This is due to the fact that they have extremely high metabolisms and need to be able to fly in order to survive.
In addition, baby hummingbirds are incredibly small and well-camouflaged. Their size and coloration make them nearly impossible to spot in the wild. So next time you’re admiring a hummingbird, remember that you’re actually seeing a miniature wonder of nature. 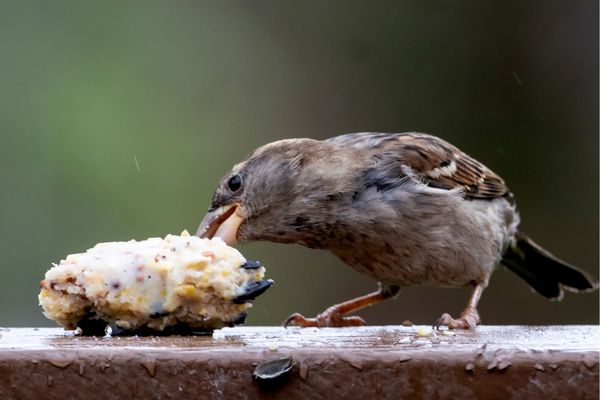 What do you call a baby hummingbird?

A baby hummingbird is called a chick. Chicks are born naked and blind, and they rely on their parents for food and shelter. As they grow, chicks begin to develop feathers and learn to fly. By the time they are ready to leave the nest, they are fully independent birds.

Nevertheless, these birds face many challenges in the wild, and only a small percentage of chicks survive to adulthood.

Can you touch baby hummingbirds?

Baby hummingbirds are some of the smallest birds in the world. They are also among the cutest. Though it may be tempting to pick one up, it is generally not a good idea to handle them. Baby hummingbirds have very delicate bones and their skin is very thin.

They are also easily startled, which can cause them to injure themselves. If you do need to handle a baby hummingbird, be sure to do so very carefully and gently. Always support its body and wings, and avoid putting any pressure on its chest or belly.

If possible, it is best to let a professional bird rehabilitator handle any injured or orphaned hummingbirds.

How can you tell if a hummingbird is fledgling?

If you see a tiny hummingbird flitting around your yard, you may be wondering if it is a fledgling. There are a few ways to tell. First, baby hummingbirds are often not as colorful as their adult counterparts.

They may have gray or brownish feathers, rather than the iridescent green and red plumage of an adult bird. Second, fledglings may appear to be less coordinated than adults, often crashing into windows or flying erratically. Finally, you may be able to spot a fledgling by its nest.

Baby birds typically leave the nest before they can fly long distances, so their nests are usually close to the ground. If you see a small nest in a shrub or tree, there’s a good chance it contains a fledgling hummingbird.