25 Stunning And Beautiful Birds You Should Know About! 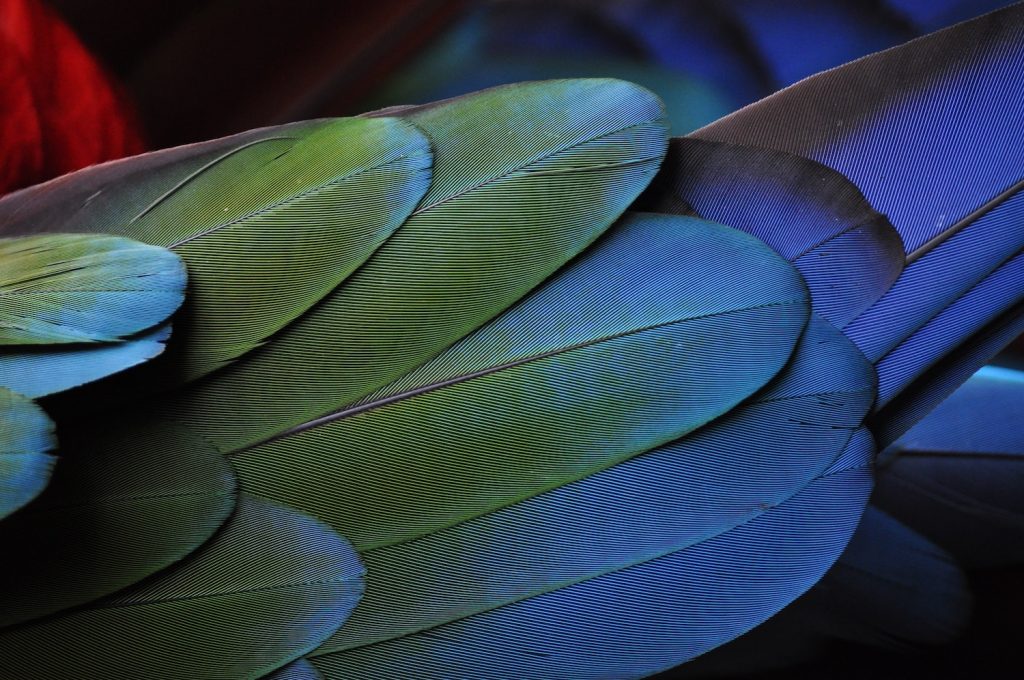 Beautiful birds can be seen across the globe, but which ones are the most beautiful?

And what’s the rarest bird from around the world?

25 Beautiful Birds From Around The World

You’ll learn what makes each of these beautiful birds unique, where they live, what they eat, and what they look like.

Blue Jays, Latin name Cyanocitta cristata, are native to North America but are commonly found in the central and eastern regions of the United States.

They’re ten inches in length and weigh three ounces. Blue Jays eat nuts, seeds, and acorns, but they are known to eat small insects such as grasshoppers, caterpillars, or beetles.

One unique identifier of the Blue Jay is when they are frightened or upset the crest on their head will stand up.

The Red-crested Turaco, also known by the Latin name Tauraco erythrolophus, is native to Africa. They can be found in the savanna, woodlands, and forests of sub-Saharan Africa.

Red Crested Turacos are about 20 inches in length and weigh less than 1 pound. They eat seeds, fruits, flowers, leaves, and termites.

These birds are not the best flyers, but they can run extremely fast and they sound like a jungle monkey. They are green bodied, white-faced, and have a red crest.

According to seaworld.com, their beautiful red crest can stand up nearly two inches.

Golden Pheasants, Latin name Chrysolophus pictus, are also called “rainbow pheasant” and “Chinese pheasant”. They are local to the mountains of the west and central China.

Males can measure up to 3 ½ feet and females up to 2 ½ feet. They eat berries, grains, seeds, and grubs.

They are identified by their unique and beautifully golden crest, their feathers that range in a rainbow of colors, and long tail feathers.

Painted Buntings, Latin name Passerina ciris, are found in the southern parts of North America and migrate south to Central America and the Caribbean.

They eat seeds and grains unless they are breeding, then they will eat a wide variety of insects, too.

The male birds have beautiful, vibrant blue, red, green, and yellow colors that can be seen once the bird has reached the age of two.

They can stand over 4 feet tall and weigh up to 7 pounds. They eat small insects, shrimp, and blue-green algae.

They are often seen standing or sleeping on one leg, with the other leg tucked up underneath them.

Hyacinth Macaws, Latin name Anodorhynchus hyacinthinus, are found in eastern and central South America, but many people keep them as pets. They measure about three feet long and weigh around 3 ½ pounds. They eat hard nuts and seeds. Their beaks are strong enough to crack a coconut.

These birds are recognizable by their bright cobalt-blue feathers with yellow accents around their eyes and beak. They are the largest of the parrot species and are known for being gentle and loud.

The Quetzal, Latin name Pharomachrus mocinno, are found in forests from Mexico to Panama.

These birds are just over a foot long and weigh just ¼ of a pound. They eat fruit, lizards, insects, and other small creatures.

You’ll recognize a Quetzal by its beautiful red, blue and green colors.

The Hoopoe, Latin name Upupidae, live in Africa, Europe, and Asia. They grow up to 5 inches in length and weigh just 2 ounces.

These birds eat a variety of bugs including ants, beetles, crickets, locusts, and more.

The Hoopoe is the national bird of Israel.

These birds have a black body, white chest, and vibrant orange feet. Their beak changes colors from bright orange to grey in the winter.

Their coloring is close to penguins, but they look more like a parrot than a penguin.

They are about 40 inches long and weighs just under 3 pounds.

The Stork-billed Kingfisher, Latin name Pelargopsis capensis, is found in Southeast Asia and the tropical regions of India. They grow up to 14 inches and ½ a pound.

The Peafowl, Latin name Pavo cristatus, is most commonly known as the Peacock (which refers to the males) and is native to India. They eat seeds, flowers, plants, small insects, frogs, and small reptiles.

Peafowls grow up to 4 feet tall and weigh up to 14 pounds. The tail feathers can reach up to 6 feet in length.

Peafowls are typically either green or blue bodied with beautiful tail feathers that spread out behind their bodies.

They grow up to a foot in length and weigh up to 5.5 ounces. They eat nectar, fruit, small insects, and pollen from flowers.

These parrots have a bright orange beak and chest. Their heads are blue and wings are green. Their coloring patterns make them unmistakable.

Both males and females display bright and vibrant colors.

The Keel-billed Toucan, Latin name Ramphastos sulfuratus, is most commonly found in tropical forests from Mexico to Columbia.

They grow up to 6 inches in length and weigh up to 18 ounces. They eat mostly fruit, but will also eat insects, lizards, eggs, and baby birds.

Toucans are widely recognized as a cereal mascot. They have a large, colorful bill with a black body and a sunshine yellow chest.

The Northern Oriole, Latin name Icterus galbula, lives in northern Canada and migrate as south as the central and eastern United States. They are about 8 inches long and weigh up to 2 ounces.

These birds are recognizable by their blackhead, fire-orange chest, as well as white streaks on their wings. They are the mascot for the Baltimore Orioles, a Major League Baseball team.

The African Crowned Crane, Latin name Balearica regulorum, is native to Africa. They are 3 ½ feet tall and weigh over 7 pounds.

They are about 8 inches in length and weigh under 2 ounces. These birds eat primarily fruit, but will sometimes eat insects.

Bohemian Waxwings are mostly light brown and grey; however, their heads are a beautiful peach color, the tips of their wings are blue, and the tip of their tail looks as if it has been dipped in yellow.

The Broad-billed Hummingbird, Latin name Cynanthus latirostris, is native to North America. They are just 10 cm long and weigh under 4 mg.

These beautiful birds feature a long beak with blue and green bodies. Their wing move extremely fast – up to 78 beats per second.

The Dusky Lory, Latin name Pseudos fuscata, is found in New Guinea and the surrounding islands. They are about 10 inches long and weigh under 10 ounces. These birds eat fruit, seeds, nectar, and insects.

They are known for their bright orange beaks and vibrant orange and yellow feathers. Their feathers can also be blue, green, and yellow.

Like other Macaws, they are about 3 feet in length and weigh over 2 pounds. They eat fruits, nuts, and seeds, as well as fruits that are toxic to other animals.

Scarlet Macaws are a beautiful mix of reds, yellows, and blues. Their beak is strong and they are known for their loudness even though they are gentle birds.

The Peafowl, Latin name Pavo cristatus, is most commonly known as the Peacock (which refers to the males) and is native to India. They eat seeds, flowers, plants, small insects, frogs, and small reptiles.

Peafowls grow up to 4 feet tall and weigh up to 14 pounds. The tail feathers can reach up to 6 feet in length.

Peafowls are typically either green or blue bodied with beautiful tail feathers that spread out behind their bodies.

The Wood Duck, Latin name Aix sponsa, is native to North America. These ducks grow up to 21 inches tall and weigh up to 2 pounds. They eat fruits, nuts, and seeds, but their main source of nutrition is from plants.

These ducks are light bellied, marron chested, black-winged, with white accents and a blue-green crest. The males coloring is bolder than the females coloring.

They are under a foot in length and weigh less than ¼ of a pound.

These birds eat mostly berries, fruits, and insects, but have been known to eat reptiles, too.

Blue Birds of Paradise are recognized by their black and blue feathers as well as their black face and blue creased head.

The Gurney’s Pitta, Latin name Hydrornis gurneyi, is found in the Maylay Peninsula. They are 7 inches in length when full grown and can weight up to ¼ of a pound. These birds primarily eat worms, insects, and slugs.

The Gurney’s Pitta has vivid yellow and orange on its head, along with blue, white and brown bodies.

Females are not as bright as the males, but still have the blue cap on top of their heads.

The Lilac Breasted Roller, Latin name Coracias caudatus, is native to Africa. They are under 4 inches in length and under 4 ounces, too. These birds eat insects as well as small amphibians and lizards.

These beautiful birds are green and blue in color and feature a lilac chest. They have brown eyes and a black bill.

Which Bird is the Most Beautiful?

Of course this is a matter of opinion; however, there are few birds who can match the vibrant colors of the three macaws on this list.

Which Bird is The Most Famous?

The most recognizable bird on this list of beautiful birds has to be the Flamingo because they are native to multiple continents.

Which Bird has the Most Beautiful Eyes?

Which Bird is Prettier, Male or Female?

Generally speaking, the males usually have the brightest, most vibrant colors when compared to the females of the same species. 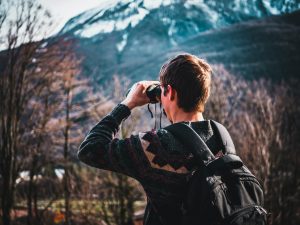